Anatomy of the Eye

When considering the anatomy of the eye, it is important to first consider the orbit as a whole.

The orbit is the term used to describe the region which contains the extraocular muscles, nerves and blood vessels, the lacrimal gland, the optic nerve and, of course, the eye itself.

In basic terms, the eye can be considered to be made up of three distinct layers: 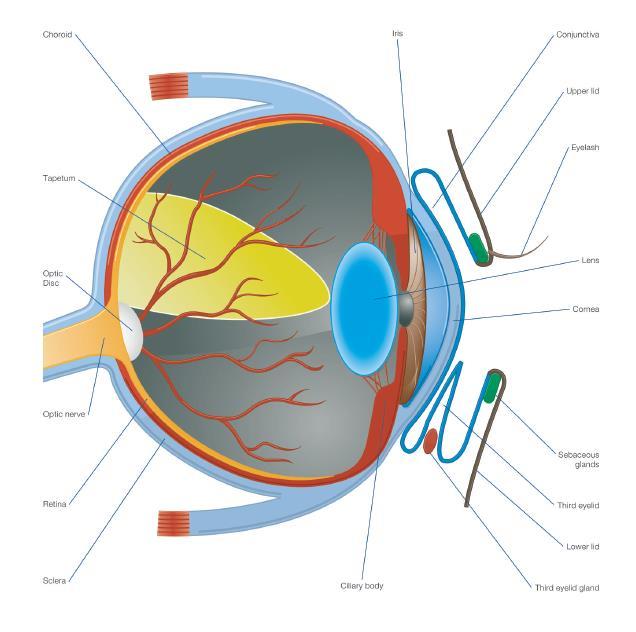 The upper and lower eyelids rest on the ocular surface and function to protect and lubricate the eye. They consist of an outer layer of haired skin, supported by a fibrous tarsal plate and muscle and are lined with inner conjunctiva. Between the lower lid and the cornea sits the third eyelid, or nictitating membrane. 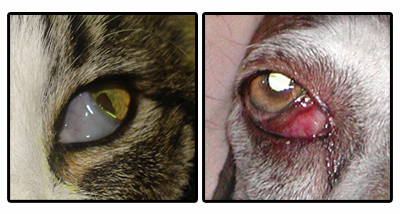 Given the orbit forms a relatively enclosed space, any changes to the structures within it can have an effect on the entire contents. An increase in volume, caused by space occupying lesions, can lead to the eye being moved forwards within its orbit.

Clinically, this presents as exophthalmos, often with third eyelid protrusion.The more common conditions of the orbit which may cause exophthalmos include retrobulbar abscesses, cysts, neoplasms and myositis of surrounding musculature. Conversely, if the volume of contents reduces, the eye can move backwards within the orbit, presenting as enophthalmos. 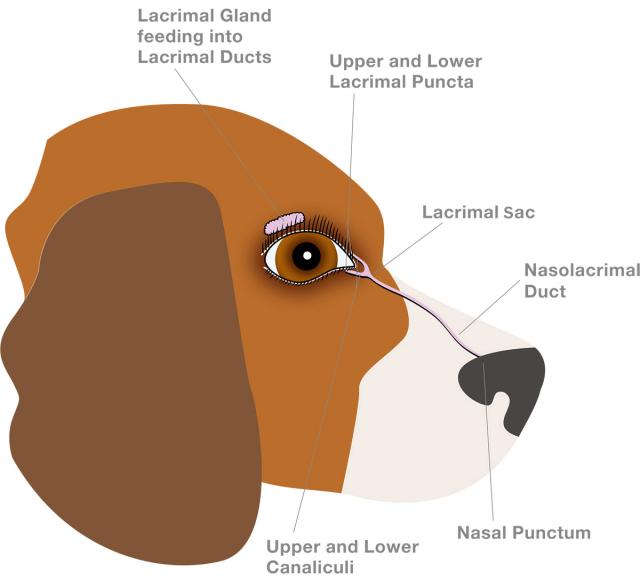 The lacrimal system is made up of multiple different components which have two main functions.

The second function of the lacrimal system is excretion. Around 25% of the tear film is lost by evaporation, however the remainder drains into lacrimal puncta through their associated canaliculi, through the lacrimal sac, the nasolacrimal duct and eventually ending up in the nasal cavity.

Problems with the lacrimal system can include issues with:

The sclera forms the largest portion of the thick fibrous outer ‘coat’ of the eye. It is continuous with the cornea anteriorly and posteriorly it joins the optic nerve. It consists of three layers:

The sclera is primarily made up of irregular collagen fibres, making the sclera relatively opaque. Where the stroma has a large number of collagen fibres, it reflects light and this accounts for its white appearance.

Primary scleral disorders are uncommon in dogs and even rarer in cats and most pathologies are considered to originate from the cornea, only having a secondary impact on the limbus, sclera or episclera. 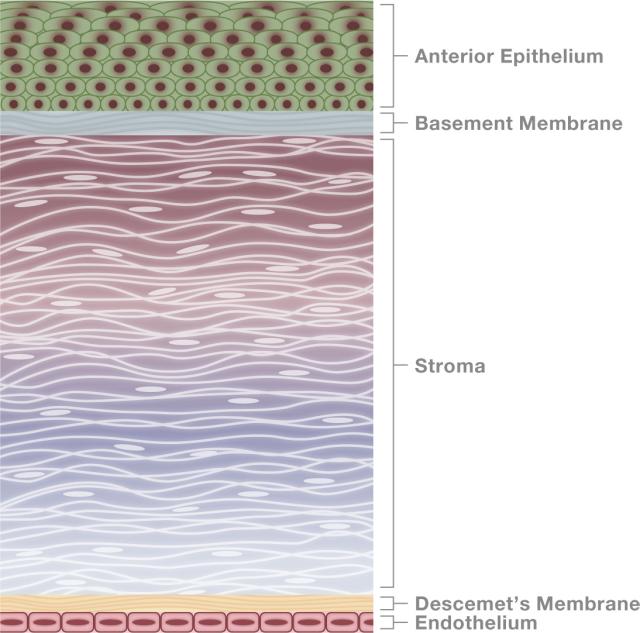 The cornea is the most anterior, transparent section of the outer coat of the eye. The point at which the cornea, bulbar conjunctiva and sclera meet is called the limbus.

Signs of damage or disease of the cornea include pigmentation, vascularisation (the normal cornea does not contain blood vessels, however after insult both deep and superficial vessels may grow to promote healing) and oedema (leading to lack of translucency).

The aqueous humour is continually produced by the ciliary body, primarily by active secretion and to a lesser degree by passive diffusion / ultrafiltration. After production, the aqueous moves to the posterior chamber, through the pupil and into the anterior chamber.

The production of aqueous, and its volume within the aqueous chambers, contributes to the intra-ocular pressure (IOP), therefore there must be continuous drainage to balance the production otherwise the IOP will rise, which can lead to glaucoma. The reference range for IOP in cats and dogs is 15 - 25 mmHg.

The majority of the aqueous drains at the drainage angle (located at the junction of the base of the iris and the corneoscleral tissue).

The vitreous humour acts as a translucent medium through which light can transmit from the lens to the retina, as well as providing mechanical support and protection to the eye and its internal structures. It also plays a vital role in metabolism within the eye.

It is a clear hydrogel, which is composed of water alongside a small amount of collagen fibres, cells (otherwise known as hyalocytes), protein and hyaluronic acid. Despite water making up 99% of the vitreous, the additional components make it 2-4 times more viscous. 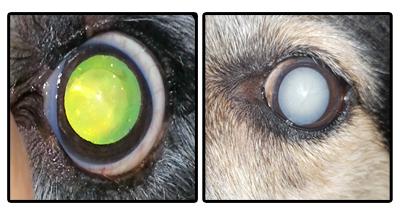 The lens sits in the patella fossa and is held in place by the lens zonules or suspensory ligaments. Changes in the tension of the zonules alter the shape of the lens and change its optical power. The adult lens does not have a blood supply, and therefore relies on the aqueous for the provision of oxygen and nutrients and the removal of waste. Disturbances in the aqueous can therefore affect lens metabolism and transparency.

As an animal ages, new lens cells are produced at the periphery and older cells move towards the lens nucleus. This means that with time, older cells become denser and more tightly packed - this causes a visible grey haze in the lens and is known as nuclear sclerosis.

This differs from a cataract, which is a term used to describe a group of ocular conditions which present as opacity of the lens or its capsule.

The role of the retina is to convert (transduce) light into neurological signals, that are then perceived as vision by the brain. It contains the specialised photoreceptors - rods and cones -, which when hit by light produce chemical energy which the retina processes and transmits to the visual cortex.

The retina is made up of multiple layers, but these can be broadly split into two, determined by the tissue from which they developed embryonically.

The outermost layer (adjacent to the choroid and sclera) is known as the retinal pigmented epithelium. It is a single layer of cells and supplies the retinal tissue with metabolites, as well as removing waste. It also functions to recycle photopigment of the photoreceptors.

The remaining layers are collectively known as the neurosensory layers. It is these layers which initiate and process the neuronal signals which are later perceived as vision.

The uveal tract is the term used to describe the vascular, middle layer of the eye. It has three parts:

The iris works to vary the size of the pupil and therefore controls the amount of light which enters the eye. To do this, the iris has two sets of muscles; the sphincter muscle, which encircles the pupil and constricts the pupil, primarily through parasympathetic innervation, and the dilator muscle, whose radially orientated fibres allow for pupil dilation, predominately through sympathetic innervation.

The ciliary body sits behind the iris and in front of the choroid. As described in the Aqueous section, it is important in ocular metabolism - playing a large role in the production and drainage of the aqueous. It also helps to suspend the lens, and therefore plays a smaller role in accommodation of the lens.

The choroid can be found in between the sclera and the retina and is a highly vascularised structure, which helps to provides blood to the outer retina. A reflective layer, known as the tapetum, sits within the choroid and works to reflect light back through the photoreceptors - increasing visual sensitivity.

The uveal tract plays a key role in maintenance of the blood-aqueous barrier and disease of its structures can cause a breakdown of this barrier.

The conjunctiva is the term given to the thin, mobile, mucous membrane which lines the inner surface of the upper and lower lids, the inner and outer surfaces of the third eyelid and the anterior portion of the globe (next to the limbus).

The conjunctiva consists primarily of stroma, which is split into a deeper fibrous layer (mainly connective tissue, blood vessels and nerves) and a more superficial adenoid layer, which contains conjunctiva-associated lymphoid tissue. Above this sits the conjunctival epithelium, which contains goblet cells and this layer is coated by the pre-ocular tear film, which provides protection and nutrition.

The conjunctiva is a highly exposed mucous membrane, and is highly responsive to noxious stimuli due to its rich vascular supply and lymphoid content. Conjunctivitis is a common differential diagnosis in the case of ‘the red eye’ and the common signs of conjunctival inflammation include oedema (chemosis), hyperaemia and presence of a discharge. 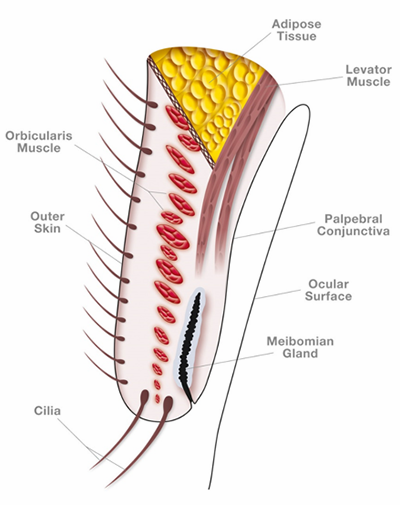 The upper and lower eyelids are essentially tissue flaps with conjunctiva on the inner ocular surface and haired skin on the outer surface. They contain a tarsal plate (for support), muscle, glands and cilia (eyelashes).

The outer skin is thin when compared to the rest of the body. Neither the dog nor the cat have cilia on the bottom lid. In the dog, the upper eyelid contains >2 rows of cilia, whereas the cat does not have any. Instead the first row of hairs on the skin are adapted for the same purpose. There are two types of gland associated with the cilia; Moll (which are modified sweat glands) and Zeis (sebaceous glands).

The other type of gland found within the eyelids is the lipid-secreting meibomian gland, which provides a component of the tear film. Closure of the eyelids is down to the action of the orbicularis oculi muscle, and the upper lid in particular has a large percentage of fast twitch fibres which provide the rapid blinking action. A complete blink is essential to distribute the tear film and maintain a healthy ocular surface. However, many breeds of both dog and cat have poor eyelid conformation, meaning the eyelids do not slide across the ocular surface, and this can contribute to ocular surface disease. 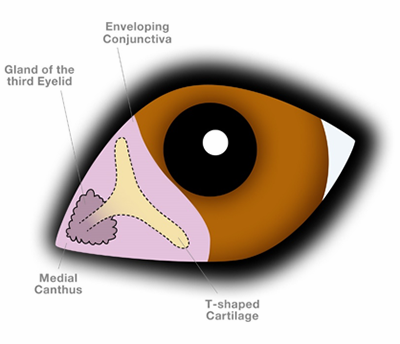 The third eyelid, otherwise known as the nictitating membrane, lies in the conjunctival sac at the medial canthus. It is made up of a t-shaped piece of cartilage which is enveloped by conjunctiva. The gland of the third eyelid sits at its base and is responsible for production of up to half of the tear film in dogs. There are also many lymphoid follicles which reside beneath the inner/bulbar surface.

The third eyelid moves across the eye passively when the globe is retracted, and this occurs every time an animal blinks. There are some muscular attachments but their effect is not as great.

Anatomy of the Eye Poster 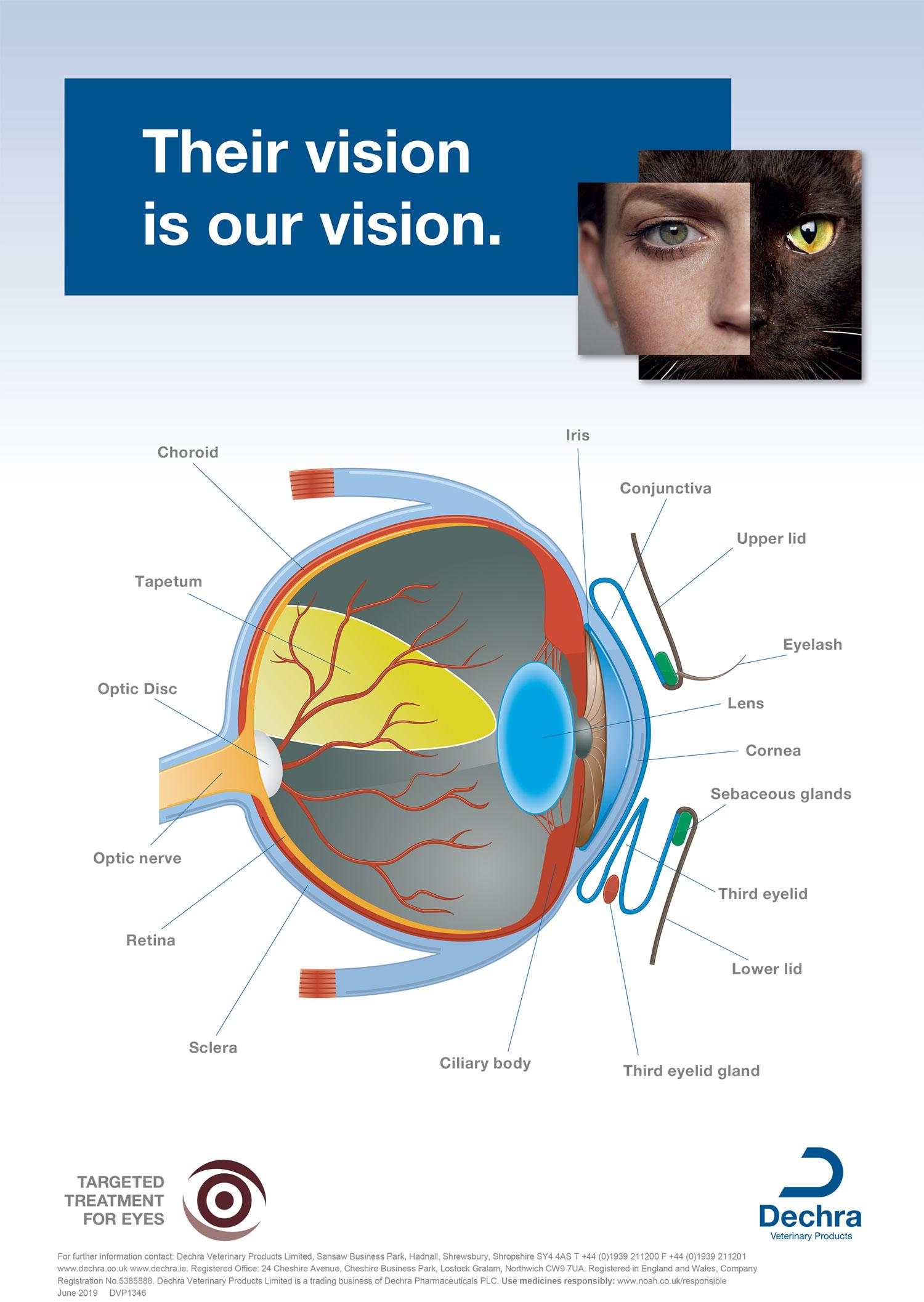 This information is only for vets. Login or create an account to gain access to this and a lot more.

To find information that meets your country’s legislation, please consider going to a country website that matches your location.

If you are unable to find your country location then disregard this popup and proceed to the website.